Only a few bags of elements remain. The two layers of Ninjago City that I’ve already built (The Old World & The Street) are already a massive structure with a plethora of colors and details. It was time to dig in and build out the final heights!

The ’13’ bags give us two minifigs: Lloyd’s mother, Misako, and his Green Ninja suit. This version of Misako seems much younger than previous and she has a great hairpiece and a torso that should be useful. The Green Ninja suit is identical to the others that I’ve seen, except that Lloyd’s head has been swapped for a transparent brown head element.

Misako’s alternate face has a mischievous wink. From the back, it is easier to see the chopsticks being used as hairpins.

At this point we’ve seen most of the interesting elements that this set has to offer, but the brick yellow window glass is new. It’s also exciting to see a seventh color of nanofig make an appearance in the set.

This thirteenth set of bags makes the tiny apartment that Lloyd and his mother share. It’s cramped, with only an 8×8 interior, but packed with details. Yet another roof technique here. The variety of roofs alone should be exciting to an AFOL.

Look at all the details packed into that tiny room! There are even more hiding in there waiting to be discovered.

This set of bags is all about foundation. There are some clever roof designs, but mostly this jest gets us ready for the next set of bags.

More fine detail on the back of the torso.

The ’15’ bags build the rest of the rooftop sushi restaurant and provide the foundation for the final bits of the build. The sushi conveyor is a really cool, simply built but with some nice snot techniques.

The last minifig to make an appearance is Officer Noonan. Apparently she’s part of the same police force from the LEGO® Movie (based on the torso printing). Great to get a female face with cop glasses.

The last set of bags has a wealth of sand green elements. Some of these we’ve seen in the 70612 Green Ninja Mech Dragon, but others are entirely new for this set.

The final bits of the build are this really cool sand green tower (which houses the cities only bathroom). The brick-built sea creatures are a real treat too, though the puffer fish is a bit finicky to assemble.

This topmost level of the city is more fragmented than the levels below, but rich with detail. The interiors here have more character and humor that those on the lower levels.

So many amazing details in this set. I could point out dozens of fun bits, but it is so much fun to explore them yourself or to watch other people find them once you have the set on display.

I mean, check it out! This is a massive set. I’ve talked to a number of other AFOLs that have built it and not heard a single complaint. Well worth the time and money.

Even the back side has some great things to see! 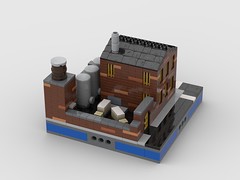 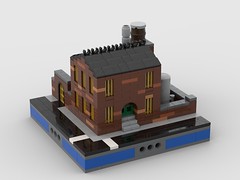