I’m a big fan of LEGO® mecha. I love seeing all the amazing models getting posted on the internet. The only sad thing, for me, is that I don’t build more of them. Maybe I start to ambitious. Mostly, I’m slow. I started my latest mecha back in May!

I started with the idea to build something tall and lean. The color should be vivid (I was leaning toward some shade of azure). It needed to have a pilot and a rifle, and maybe some swords. Not all of that worked out.

I decided to start this frame from the torso and work my way down. I really didn’t have much of a plan, so I just did my best to have studs going every which way so that I could attach armor later.

Long, spindly legs. These would evolve a number of times.

I managed to make the frame as tall as I hoped for, but the hands necessitated beefy arms. The frame was looking awkward and I was hoping that skinning it would give me a chance to improve the silhouette.

Once I dug into my parts, I realized that the dream of azure was dead. I simply didn’t have the parts, so I switched to red. I hadn’t used red much, so this would be new territory.

As I refined the shape, the chest got a little broader and I made my first pass at feet. I liked where I was going, but the shoulders and feet needed work.

The broad chest and tapering legs were really working for me here. I still needed to rebuild the feet and do something about the shoulders. There was also the little matter of a head.

Here I was getting closer, and farther, from where I wanted to go. The feet were nice, as complicated (and textured) as the legs, but stable. Unfortunately I built those shoulders. They were terrible, but I had no idea how to fix them.

Luckily, I was about to have plenty of time to think about it. My wife and I bought a house and moved for the first time in a decade. A lot of chaos, but eventually I’d have a dedicated studio space for my building…

Months pass with the model in a bin, but thankfully, the design was still percolating in my brain. I made some changes to the color blocking and stripped the shoulders back down. I built the first prototype for the rifle. That black was a bit too much.

So I rebuilt the rifle, keeping the shape but using dark stone grey instead. The whole thing was getting a bit top-heavy, so I had to ditch my plans to have a backpack and the dream of being able to attach extra weapons back there.

I made a few more refinements. I build a pilot. I added detail to the cockpit. Then it was finally time for the Ryder RMS-47 to get its picture taken. 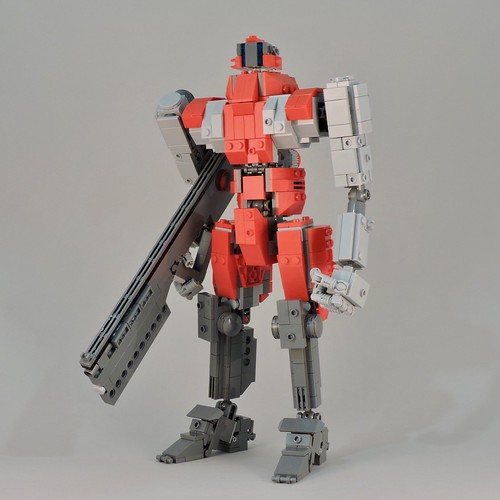 I’m really happy with the finished model and I think that the photos really do it justice.