I’ve been bullish on this new wave of Ninjago sets. The combination of dark colors is excellent and the spectral bad guys are full of win. I picked up the Wu Dragon a while back, so it was only a matter of time until I added the other dragon from this range to my collection.

Nothing too surprising in the bags. I really like those wings and I suspect that we’ll see them used a lot for ghost ships and such. The spring green elements really pop against the other, darker elements. It certainly fools the eye into expecting more glow-in-the-dark elements.

Bag one starts out with a new version of Jay and Chain Master Wrayth. The new ninjas are gorgeously printed and mix of new elements for the bad guys are great. Most of the figures in this line have over-molded headgear (two different plastics molded together, no need for paint).

I really like the detail on the Wrayth’s head. It’s almost a shame to put on the helmet that hides so much of it.

No alternate face for Jay, but still a lot of nice back prints here.

Bag one builds a small temple structure for protecting a blue gem. Lots of great weapons here and some nice glow-in-the-dark lanterns. Jay gets some kind of flying contraption too. A nice selection of extra elements rounds it out.

New version of Kai in bag 2. There is a good view here of his new elemental weapon, some kind of throwing star. Under the hood, his face is nearly identical to Jay.

Kai gets another of those flying boards and otherwise bag 2 just lays a foundation for the rest of the dragon. The translucent neon green plates are a nice touch among the dark colors.

Bag three gives us a new evil version of the green ninja and a couple of the skreemers. I like that the little guys each come with food and a weapon. This new green ninja is really cool and well detailed. The over-molded armor is particularly nice.

Without his armor, we can appreciate the detailed printing of his corrupted ninja outfit. I love the spring green head with the evil smirk.

No alternate face, but a nice back print.

The third bag builds out the dragons body, adding those undulating stripes in spring green and the massive saddle/throne.

In bag 4 we start with Cowler. He’s pretty typical of the ghost warriors in this line with translucent neon green legs and head and a plethora of weapons.

A nice smirking fang mouth hiding under the face mask. I don’t know that these translucent heads will see much use in the future, but I hope so.

Another nice back print. All of the ghost warriors have this ghostly ying-yang symbol on their backs. I love how clearly the leg printing can be seen through the translucent plastic.

The rest of bag four brings us the dragon’s head and tail. The attention to detail on this model is amazing and the intricate head is really fun to build. One of my favorite features are the translucent chains that the rider can use as reins. I can’t get enough of the combination of translucent neon green and spring green against black and dark blue.

Here we have Yokai, the last ghost warrior in our last bag. As with the rest of the ghost army, he has more weapons than he can handle. It can’t be seen in this picture, but the back of his cowl is translucent too.

Without his accessories, Yokai is almost identical to Cowler.

Again with the bad guy’s crest on the back.

We finish out the dragon with bag 5, building his legs and wings. The legs are all nearly identical, but once again, the combination of dark colors and spectral greens works wonders. The wings are just simple frames with fabric coverings. The two color printing on the wings looks great and the fact that they are one-sided isn’t nearly as jarring as the sail on Naida’s Epic Adventure Ship.

The gang is definitely all here: a big dragon, six minifigures (and a couple little guys), and a shrine. There wasn’t anything to disappoint in this set. All of the minifigs are gorgeously printed and come with a pile of weapons. The price per piece on this set is a little below par, but the build makes up for it. Even as a parts pack there is a lot of value here, though it might be a bit too big for most drafts.

If you’re a fan of dragons, don’t miss this one! 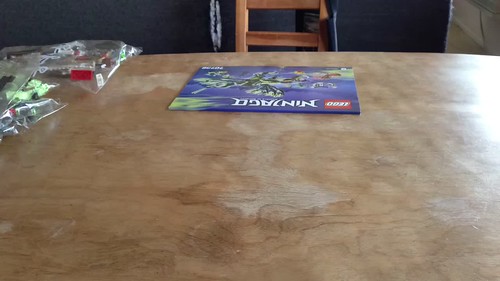